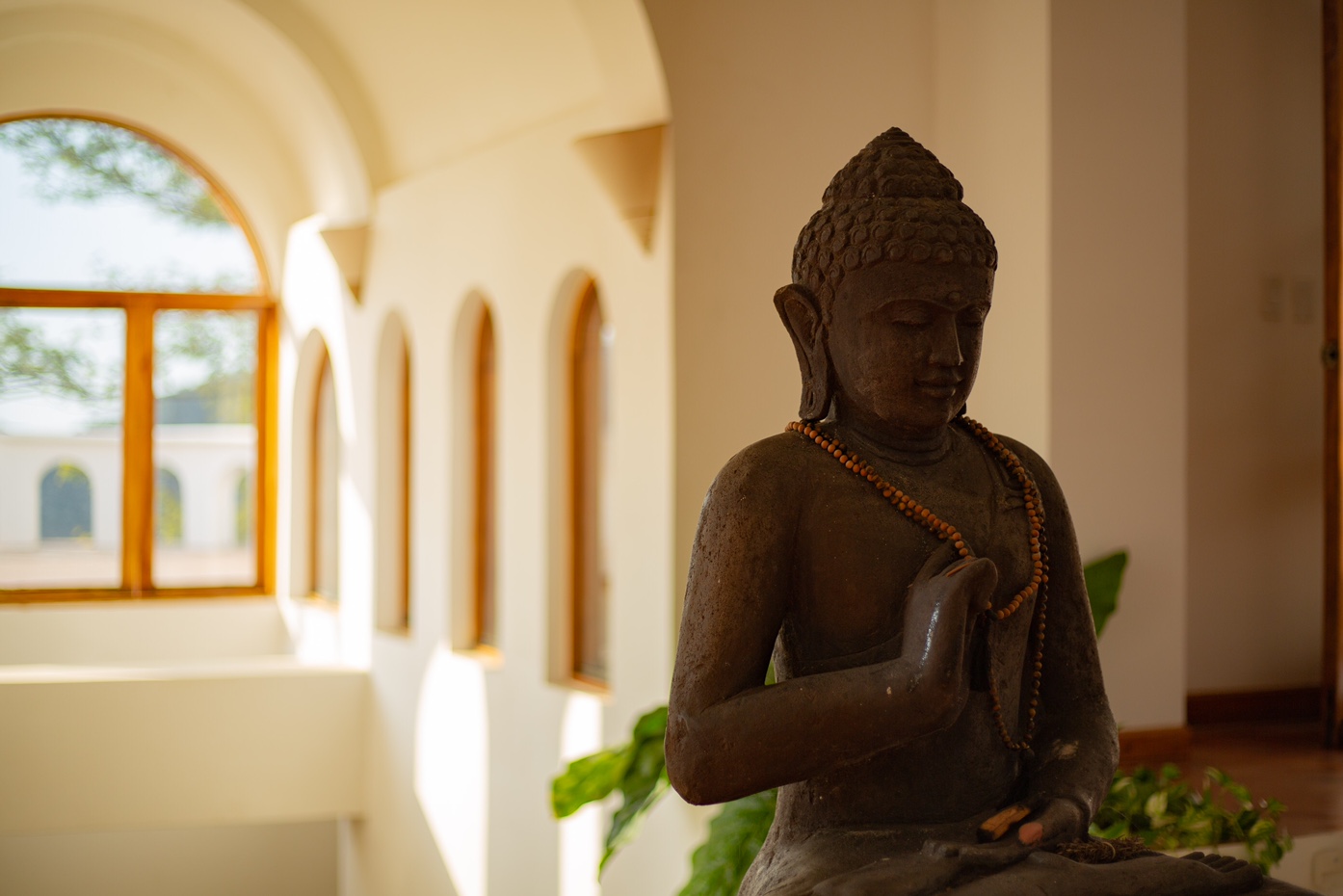 We have been working on our Costa Rican listings for a few months, well close to half a year, and expanding our travel real estate destination locations. We have met and partnered with some real estate companies to co-list some of their most interesting properties. One such property we have co-listed is Casa Olympica. Having been fortunate enough to have had friends take me touring around the countryside sharing property and scenic routes, it was an easy decision to head off with a local realtor to see what she deemed a gem of a home. Elizabeth Cundill from Mango Realty told me just enough about Casa Olympica to pique my interest. Although a good 15 minutes from the beach it feels like you are hours away from civilization. Off we went in our matching rose coloured Havana flip flops (I think every woman in Nosara has the same sandals not joking). We headed up the steep incline to Doña Cielo. It has taken time to understand the lay of the land in Costa Rica as the mountainous hills and jungle make it difficult to catch your bearings. The satellite imagery gives you the best sense of location. The homeowners were puttering around the house when we arrived in this quiet calm home. The beauty and peacefulness of this temple they have called home for 13 years was awe inspiring. 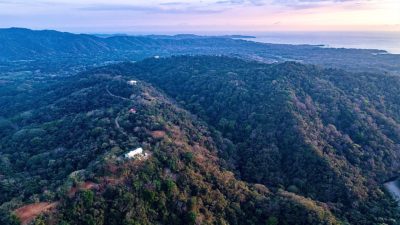 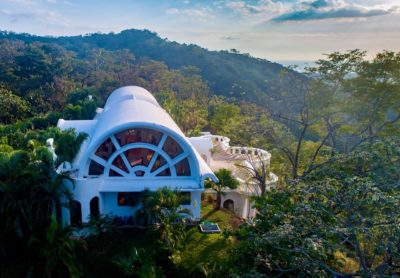 Tim and Wella Hartig came from the area of Newport Beach California. Tim referred to their lives as a typical American family. Just another family making their way. However, as beautiful as their grace and humility so is their story. Wella and Tim were the dedicated parents of not one but two world champion swimmers. After their son’s three gold medal wins in the 2004 Olympic games in Greece the family was given an extremely rare two-week holiday and father and son headed to Nosara, Costa Rica. When Tim and Aaron arrived home, they had big news! They had purchased a stunning lot in an area known as Doña Ceilo. Tim recounts how Aaron was laser focused on finding the perfect lot to build their home. They looked at many and finally decided on “the one”. They purchased the lot in 2004 and by 2008 where living in Costa Rica full time. The developer of the land that they had purchased was also an inspired builder and the result is this timeless home that is incredibly well built and will stand the tests of time. Upon arrival at this house the curved steps bring you to the center of the home which feels more like a place of worship with the 23-foot domed ceiling with four flying buttresses common in ancient architecture.

A life size buddha sits centered and waiting and casting a peaceful prayer and facing the front door to greet the new arrivals. The views capture your attention instantly and draw you to the expansive top terrace. This home is breathtaking in every way and a from what I hear is a near replica of a rural Greek church. Casa Olympica was designed and built by a well-known craftsman John Fraser and true to his distinctive style. 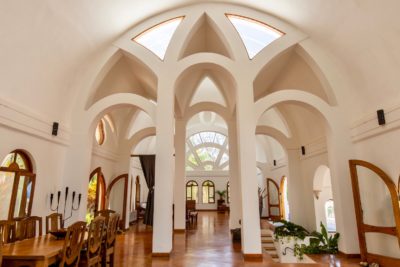 When you visit Nosara it is still remote and provincial, but you only must go back 10-15 years to a time when there was no gas station, no fancy coffee shops or hotels. Tim and Wella reminded me that in 2004 you had to gas up from a barrel in a field and every road was dusty and potholed making any conversation whilst driving an impossibility. They braved the conditions and lack of amenities and became part of the community. They and their neighbour’s are true pioneers of the area. A day in the life of Wella and Tim starts at 5 am. By 5:15 they are both out running the hills of Dona Cielo and by 6:30 am Wella is swimming. Infact, Wella so loves to swim she authored a book called “Buoyant” which not only I cannot wait to read but describes her love and relationship to water and the effect it has had on her life and the life of her children. This home is the backdrop and meditative space for these two souls. This active lifestyle they had well before they arrived in Costa Rica. Tim is an avid surfer and talks about surfing like it is part of his daily fabric so with the proximity to some of the world’s most fantastic surfing the location is a perfect fit. From the moment I met them both puttering around the concrete terracotta-stained floors I realized just how beautiful not only their home was but also the two of them. 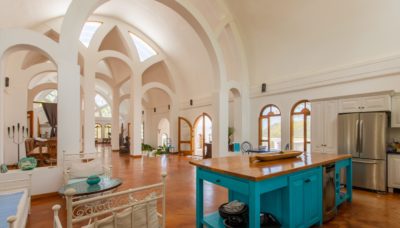 The entire first floor is open concept with curved windows and archways. The large kitchen has lots of storage and counter space and the white cupboards and cheerful turquoise accents give it the feel of a seaside home. There is an abundance of light from the 40 large custom crafted windows and upper windows. The furniture and interior design were selected and installed with the help of a local designer Pauline Steenkamer of Nosara Design who selected the furnishings and antiques which created the ageless and classic ambiance of the space. The staircase that heads down to the lower master bedrooms is centered in the middle of the home and each wing has its own ensuite bath and walkout to lower terraces. The home flows beautifully and the views from both bedrooms are magical. The left side terrace looks to the mountains and the Pacific Ocean sunset. The right-side terrace has mesmerizing views of the meandering Rio Montaña Valley and riverbed …I did not want to leave this terrace overlooking the valley as I settled into a wire frame picnic chair, but we had more work to do! Tim walked me around the house mentioning that the lot beside would be of value to the house to create a larger footprint. We spoke of options for the future buyer…. like an addition or breezeway to addition, pool house and guest casitas. I had it all mapped out as I left and so inspired to purchase myself and if failing that to absolutely find the buyer. 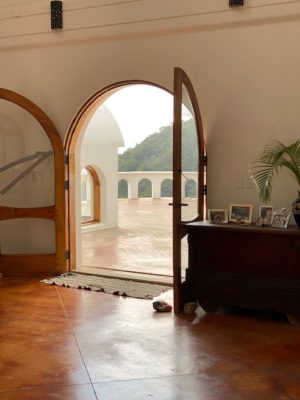 Casa Olympica is a home to be remembered and more importantly it can be yours. This is currently listed on LuxBay courtesy of Mango Real Estate Nosara. Special thanks to Tim and Wella for inviting me to view Casa Olympica.